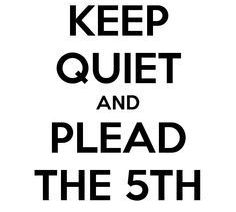 That is the answer to: “What to say when the police want to question you?”

The Fifth Amendment to the U.S. Constitution states (in part) that no person shall be compelled to bear witness against him/herself in any criminal offense.

Actually, people are inherently honest.  When police knock on their door, they strongly believe, “If I just tell my side of the story or my facts, then this investigation will just go away, and I will be free to resume my life.”

You will not convince the police of anything, and often your words will not be transcribed by the police exactly as you state them.  An accused will have time to tell his/her story in court when the time comes.

If questioned, simply state: “No disrespect officer but I would like to assert my Fifth Amendment right to remain silent.”

You can provide name, address, date of birth, and ask for a lawyer. Do not fill the silence with small talk or any other kind of talk.

Clients often think that because the police officer hasn’t given the “Miranda” warning, what they say cannot be used in court. Wrong again!  A police officer only gives that warning when you are under arrest.  When investigating a crime and talking to suspects, no Miranda warning need be given.

If you are stopped by a police officer while driving your car, after you provide license, registration and insurance card, the officer will ask you questions. Usually, the question is: “Do you know why I stopped you?”

Your answer is?  “No disrespect officer but I would like to assert my Fifth Amendment right to remain silent.”

If the officer directs you to move your car or asks to search your car ask the officer, “Is that a command, officer, or a request?”  Commands must be obeyed. They may later turn out to be impermissible commands, but on the street, you must obey them, particularly if you are facing a gun.

Most people think of themselves as smart. They think they can talk their way out of trouble. They think they can just clear things up.  What they don’t understand is that the police may have already spoken to others that contradict your story. They are just probing for information from you that will bolster their theory of how the crime happened.  You are not talking your way out of whatever is their theory of the investigation.

Most people I represent in Criminal Court have self-incriminated themselves. Again, just shut up!  Police are often looking for probable cause to arrest you. You may think that you are helping your cause by stating, “I only consumed two beers” (as opposed to ten beers), but you have just served up probable cause on a silver platter.

Ok, here is your speeding ticket for 60 mph! Just shut up!

Finally, when I speak to police when a client is in custody, I demand that they do not question my client while in custody. If they ask me, “Why not, counselor?”

I simply state, ”Because he may admit to the crime.”

That is what the Fifth Amendment affords you.

This site uses Akismet to reduce spam. Learn how your comment data is processed.